2004 Vacation to Visit Jake and Jean Rhinebolt in Maine 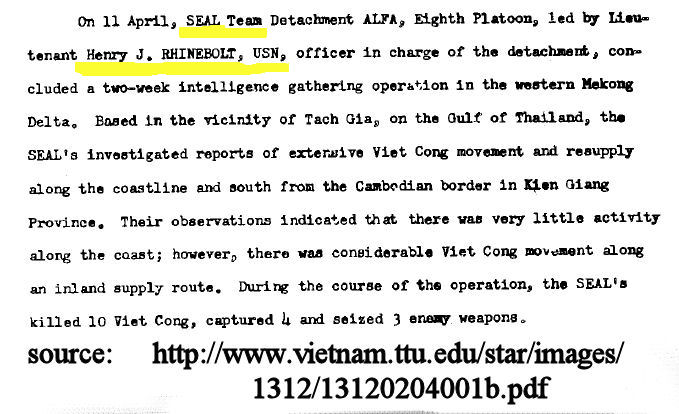 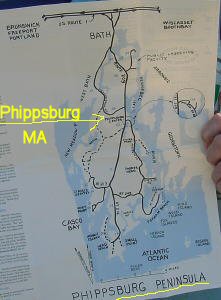 Today, June 19, 2010; around 1500 hours I received a telephone call from JeanRhinebolt, Jake’s wife that he was dead.
She said she thought that his pacemaker failed and that by the time EMS arrived at their cabin, it was too late.
I will miss him dearly as will other SEALs that had the pleasure to work with him.
Without reservations, Jake was an Officer and a Gentleman of the highest caliber.
He was a SEAL operator that shined with honor and courage.

Our “Band of Brothers” have lost one of our best.
May he Rest in Peace.

Doc Rio,
I talked to Jake on the phone earlier this week. He sounded great and we planned a visit to his place later this summer. My favorite Jake story was when he was the OIC of three ST2 platoons in the Delta. He was a great boss and did the job I expected, keep the rest of the Navy out of our business and let the platoon get on with the war.

We were in My Tho and Jake in Can To so we would talk on the phone every few weeks and he would visit every month or so. When visiting, Jake was happy to take a position in the patrols and was great at carrying his load as an operator. He wanted to know how we were operating and that we had all the support we needed but he did not intrude in my job of running the platoon.

He called one Sunday am and we spent 20 minutes or so going through all the usual stuff and as we were finishing-up he asked if I would buy him some chewing tobacco which I was glad to do but I wonder why his store was out of such a basic need. Only then did he tell me he had taken one in the gut last night and up the river from My Tho at the Army hospital. For me that was Jake.

Rhinebolt, LCDR (Retired) age 79, of Phippsburg, Maine passed away unexpectedly at his home, on Saturday June 19, 2010.

Jack was born on September 17, 1930 in Fredericktown, Ohio. He was the son of Henry J. and Mary (Dye) Rhinebolt. He graduated from Martel High school in Martel, Ohio in 1948. Jack enlisted in the Navy, in September 1948.

He was commissioned in 1962 and served from 1964-1969 with SEAL Team 2 in Little Creek, Virginia. After, 22 years of honorable service, Jack retired from his Naval career in Fort Bragg, NC in 1970, as a Lieutenant Commander.

Jack, Jean and the boys moved to Oxbow, Maine. Jack worked for the Department of Conservation, Maine Forest Service as a District Ranger in Masardis, Maine from 1971 – 1990. During that time, Jack attended Maritime Forest Ranger School in Fredericton, New Brunswick. He also tested and passed the Merchant Marine exam Jack also worked briefly for the Nevada State Bureau of Land Management as a Forest Ranger fighting forest fires. After retiring from forest service,

Jack and Jean built a home in Phippsburg and moved there in 1996. Jack had many hobbies and interests, especially fishing for striped bass. Jack and Jean were long-time members of the YMCA and exercised every morning at the “Y” for many years. Jack is survived by his beloved wife (High School Sweetheart) of 60 years, Jean; sons Daniel Rhineboltand his wife Ellen of Las Vegas, Nevada,

He was predeceased by two sons, David and Michael; his parents; his sisters, Jean, Eileen and Dorothy; and grandson, Matthew. Memorial contributions may be made in Jack’s memory to Jack Aibis Boxing Class at the Bath Family YMCA, 303 Centre Street, Bath, ME 04530 (207)- 443-4112.

Graveside services will be held on July 1, 2010, in Oxbow, Maine at 12 noon. Please visit www.desmondfuneralhomes.com to share your thoughts and condolences with Jack’s family.