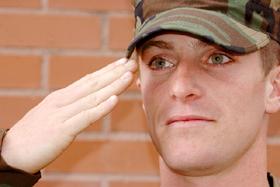 HORNELL – Eric Crandall looks like the average 21-year-old, but those who know him will tell you that he is anything but average.

Crandall recently completed 13 months of advanced training to become a Navy SEAL, and is back in the Hornell area sharing his story with people who are considering a career in the Navy.

After graduating from Alfred-Almond Central School in June 2004, the three-sport athlete enrolled at Alfred University to study engineering. After completing his first month at AU, Crandall decided his life was to take a different direction. He enlisted in the U.S. Navy, taking the first step toward membership in the Navy’s most elite club – the Navy SEALS.

The first stop on his journey took him to Chicago for basic training where he received two high honors at graduation, the Navy League award and Honor Recruit award. Next, he went to Coronado Beach in San Diego, Calif., to begin his SEAL training at BUD/S (Basic Underwater Demolition School).

“Looking back on it was hard,” said Crandall, “but it was a lot of fun, too. It was definitely a challenge.”

Becoming a SEAL was more of a challenge than most of his fellow trainees could handle. When BUD/S training began Aug. 21, 2005, 128 people were enrolled.

“The hardest part is getting up and doing it every day,” he said. “It wears on you, it helps having the other guys with you.

“I have a couple close people that quit,” Crandall added. “There isn’t anything you can do about it, it’s tough but it’s their choice.”

A brochure provided by the Navy recruiters states that “SEAL is an acronym for SEa Air and Land, the environments they operate in include urban, water, desert and jungle terrain and scenarios worldwide. SEAL qualifications include, but are not limited to, diving, parachuting, demolition, sniper and foreign language training.”

As a part of his training he went to jump school in Georgia underwent cold-weather training in Kodiak, Alaska, and desert survival school.

“It’s a huge milestone,” said Petty Officer 1st Class Michael Kropiewnicki, special warfare programs coordinator. “This isn’t something that everyone does – it’s the toughest training in the military. You can’t just take any mook with muscles and expect him to be a SEAL.”

Kropiewnicki said there are high mental and physical standards that must be met before being admitted to the SEAL program, then only a small fraction of men make it through.

Crandall said that two of the main things he takes away from his training are his confidence and patience.

“There’s a certain amount of calm knowing you’re one of the baddest men on the planet,” said Kropiewnicki.

Eric is the son of Ervilla and Mike Crandall of Almond.

“He was always a high achiever in high school both academically and physically,” said Ervilla Crandall. “He is very determined and motivated and I feel like he is going to be successful in whatever he does.

“He has always been very conservative and quiet – I can see that he is mental and physically stronger but his personally to us hasn’t changed – he’s still Eric,” she added. “We were very excited for him. Honestly you hear about the Navy SEALS but until you hear about what they do you don’t understand how highly trained he really is. It gives me goosebumps.”

Crandall reports to Virginia Nov. 14 where he will continue advanced training for an additional six months. After his next phase of training he will be deployed, possibly to Iraq.

“It would make any parent nervous knowing their child is going to Iraq.” said Ervilla Crandall. “It’s constantly on our mind and we always worry.

“ Deep down there is always that fear that something will happen, but I have confidence in his training,” she added. “These are the some of the most highly trained men in the military.”