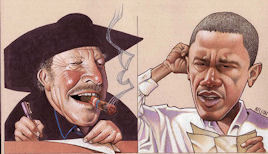 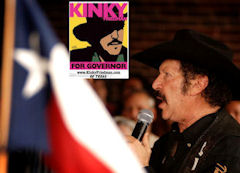 Hey, Barack, get a mutt after all! (And other unsolicited advice for the new guy in the White House.)

Congratulations! I think you might’ve won Texas if you’d only been a little stronger in the middle-name department. Middle names are one of the few things we really care about. All in all, I think you did pretty damn well down here considering you didn’t have a dog, a mullet, or a pickup truck. A number of women commented that you were “a cute little booger,” but I’m afraid most of the men were too busy clinging to their guns, their religion, and, in some cases, theirselves. I wouldn’t worry about the gender gap though. As Steven Fromholz, the former poet laureate of Texas, once wrote: “Women are from Dallas; men are from Waco.” Anyway, what’s in a name? Texans are particularly partial to people with peculiar names. Barack Obama fits right in with such Texas legends as Hondo Crouch, Ima Hogg, or our current governor, Rick “Pom-pom” Perry.

You may be wondering why I’m writing you. With the possible exception of Billy Graham, no one (in an unofficial capacity) has been closer to recent U.S. presidents than me. We started out as pen pals and became friends. (I’m the guy who challenged President Bush to a pretzel-eating contest. I also once gave President Clinton a Cuban cigar. I don’t know what he did with it.) I’d hate for the streak to end now. I have a long history of giving advice to people who are happier and more successful than I am, including our national leaders, and, thankfully, they’ve ignored me. Of course, they’ve ignored everyone else. Still, since we’re likely going to become pen pals too, I hope it’s okay for me to pass along a few tidbits.

First, I offer the words of three Democratic presidents. Bill Clinton gave me some good advice just before my run for governor, in 2006 (unfortunately I didn’t take it). Bill said, “Pick two or three issues very close to your heart and hammer them relentlessly home. With all the problems we’ve got today, it’s easy to get sidetracked.” LBJ may have been explaining why he brought the much-despised J. Edgar Hoover into his inner circle when he said (I’m paraphrasing now for the easily offended), “Always bring the buffalo inside the tent. That way, he’ll direct his pee-pee outside the tepee. If you leave him outside, he’ll aim his pee-pee into the tepee.” And JFK, an eloquent man like yourself, once reminded us that the most important thing was “not to utter words, but to live by them.”

I do have one pet peeve, and, fittingly, the peeve is about pets. John McCain has a whole menagerie; you ain’t got none. By the time you read this, you may have already purchased that much-talked-about pedigreed pooch for the kids. This does not really count. With your childhood in Hawaii, you surely know what a poi dog is. Get a poi dog. (Note to mainland readers: If you’re a haole, you may not know that a poi dog is a mixed breed—that is, a mutt, the very best dog you could possibly have. Come to think of it, if you’re really a haole, you may not know what a haole is. But I’ll save that for another letter.)

McCain’s menagerie, I must confess, almost won him my vote. In the end, however, I voted the straight Democratic ticket, with one exception: my friend Lamar Smith, the U.S. congressman. He’s a poi politician, which is to say, he’s honest. And he loves animals, having visited the Utopia Animal Rescue Ranch on several occasions. If it’s not too late, that might be a good place to get your mutt. And why stop there? How about getting a horse? As Willie Nelson says, “If you’re going to have more than a casual relationship with an animal, always make it a horse. That way, if things don’t work out, at least you know you’ve got a ride home.”

There’s another reason I’m writing you, and that’s to share the many things the two of us have in common. For one, I was born in Chicago, your adopted hometown, at Michael Reese Hospital, where Benny Goodman was also born. Your name, Barack, means “blessed” in Swahili, a language I learned in the Peace Corps and have a command of only when I’m drunk. As I’m sure you know, the word for “blessed” in Hebrew is “baruch.” This can only mean one thing: You, my friend, are a member of the Lost Tribe. In other words, you’re a fellow Red Sea pedestrian, also known as a “hebe”—and I’m not talking about the chain of supermarkets, which, by the way, seem to be multiplying faster than the Jews.

If you have any lingering doubts about your Jewish heritage, let me tell you about the ancient Samoans’ discovering Hawaii. These brave men in their primitive bark canoes sailed thousands of miles across chartless seas, occasionally placing their testicles upon the wooden floors of their canoes for navigational purposes. Today the Hawaiians say “aloha,” and the Samoans say “alofa.” Your family named you Barack, and the Jews say “baruch.” Same-same, my brother. I’m sorry if I called you the Antichrist several times during the course of a heated campaign. I’m sorry if I once told Bill O’Reilly that Obama was “a fine Irish lad.” You have truly given me hope. If an African American can be elected president, certainly it’s possible for a Jewish American to be elected governor of Texas. So from one great Jew to another, may all your wishes be little gefilte fishes. Unfortunately, what my father once told me is still true: “The best way to ruin a good man is to get him into politics.”

I’ve got to run now, Barack. I promised George W. I’d help him set up his presidential library at SMU. It’s proving to be a rather daunting task. So far we only have five very skimpy books: Dick Cheney’s Hunting Guide for Dummies, Rising Expectations for the Texas Educational System, Democratic Success Stories Since Ann Richards, Heroes of Kosher Archery, and Famous Texas Stays of Execution.

But I’m sure you have your own problems. Write soon, Mr. President-elect. This could be the beginning of a beautiful friendship.

Get Kinky videos, jokes, and stories.