Every weekday for 110 straight days we will feature a different living recipient of the
Medal of Honor. These are the men who have received their nation’s highest military honor. Brian is a board member of the Congressional Medal of Honor Foundation. The words and photos are courtesy of Artisan Books, publishers of Medal of Honor: Portraits of Valor Beyond the Call of Duty by Peter Collier with photographs by Nick Del Calzo.

Doc,
Bob was an officer in WC 42. That’s the class I was in. He was the first TEAMMATE to be awarded the Medal of Honor. He was also the Gov. of NE and a two time U.S. Senator from NE. He is not in that picture. HooYah John Ware 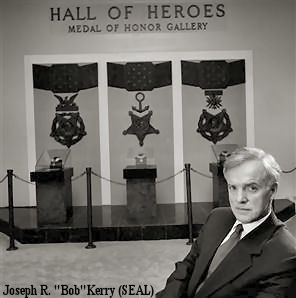 Growing up in Lincoln, Neb., Joseph Kerrey — “Bob” since he was a kid — had an “all-American” childhood: He worked a newspaper route and helped out in his father’s lumberyard, then attended the University of Nebraska with the intention of becoming a pharmacist. When he graduated in 1965, he decided to enlist in the Navy rather than waiting to be drafted. After Officer Candidate School, he volunteered for Underwater Demolition Training and was eventually selected for a SEAL platoon, where he learned to set up ambushes, abduct enemy personnel, and gather intelligence. He was assigned to SEAL Team One.

Lieutenant Kerrey arrived in Vietnam late in 1968. His SEAL squad, which called itself Kerrey’s Raiders, included Kerrey, six enlisted men, and a Vietnamese frogman who served as interpreter. Early in 1969, the team was working in the Mekong Delta, trying to ambush Vietcong cadres and kidnap high-ranking officers. Kerrey sometimes went up in a plane to make his own aerial reconnaissance of the villages before these actions.

On March 14, naval intelligence briefed Kerrey and his men on information received from a deserter that a Vietcong sapper unit had infiltrated a village on an island in the area near Nha Trang Bay and was killing civilians. Kerrey led his men on a midnight mission to neutralize the enemy unit, arriving by water in Zodiac boats and scaling a 350-foot sheer cliff so that they could approach from high ground. At the top, Kerrey split his men into two teams and moved down to the enemy’s camp. Suddenly, the area erupted in intense small arms fire. A grenade, exploding right next to Kerrey, knocked him down. Bleeding badly from a gaping wound that left his foot dangling from his calf, he called in the second team’s fire support, which caught the Vietcong in a crossfire. After applying a tourniquet to his knee and giving himself a shot of morphine, he continued to organize his team’s defense. His men, using a trail of tracer bullets to direct their fire in the darkness, routed the enemy and took several prisoners.

The helicopter sent to extract the SEALs and their captives couldn’t land on the island, so Kerrey was placed in a sling and pulled up to the hovering craft. He was treated first in Japan, and then in Philadelphia. Doctors were unable to save his leg when gangrene set in, and it was amputated at the knee.

Wearing a prosthetic, Kerrey was awarded the Medal of Honor on May 14, 1970, by President Richard Nixon. He later recalled trying — unsuccessfully — to flirt with the president’s daughter Julie during the ceremony.

Kerrey was elected governor of Nebraska in 1983 and U.S. senator in 1989, and was a presidential candidate in 1992. In 2001, he became president of the New School University in New York City. After 9/11, he served as a member of the National Commission on Terrorist Attacks upon the United States. He is the author of When I Was a Young Man: A Memoir by Bob Kerrey, which was published in 2002.

What happened to : Gerard Klann(SEAL) and Thanh Phong Village?

One Awful Night in Thanh Phong

Senator Bob Kerrey’s hands trembled slightly as he began to read six pages of documents that had just been handed to him. It was late 1998; the papers were nearly 30 years old. On the face of it, they were routine “after action” combat reports of the sort filed by the thousands during the Vietnam War. But Kerrey knew the pages held a personal secret — of an event so traumatic that he says it once prompted fleeting thoughts of suicide.

Pulling the documents within inches of his eyes, he read intently about his time as a member of the Navy Seals and about a mission in 1969 that somehow went horribly wrong. As an inexperienced, 25-year-old lieutenant, Kerrey led a commando team on a raid of an isolated peasant hamlet called Thanh Phong in Vietnam’s eastern Mekong Delta. While witnesses and official records give varying accounts of exactly what happened, one thing is certain: around midnight on Feb. 25, 1969, Kerrey and his men killed at least 13 unarmed women and children. The operation was brutal; for months afterward, Kerrey says, he feared going to sleep because of the terrible nightmares that haunted him.

The restless nights are mostly behind him now, his dreams about Vietnam more reflective. One of those, which he says recurs frequently, is about an uncle who disappeared in action during World War II. “In my dream I am about to leave for Vietnam,” Kerrey wrote in an e-mail message last December. “He warns me that the greatest danger of war is not losing your life but the taking of others’, and that human savagery is a very slippery slope.”

Kerrey — who left the Senate in January and is now president of the New School University in New York — says he has spent the last three decades wondering if he could have done something different that night in Thanh Phong. “It’s far more than guilt,” he said that morning in 1998. “It’s the shame. You can never, can never get away from it. It darkens your day. I thought dying for your country was the worst thing that could happen to you, and I don’t think it is. I think killing for your country can be a lot worse. Because that’s the memory that haunts.”

Kerrey laid the documents down. He was clearly unsettled not just by their contents but also by the realization that four members of his Seals team had already spoken about the mission. I had heard about Thanh Phong indirectly from one of those men, Gerhard Klann. Klann, the most experienced member of Kerrey’s Seals squad, had been so disturbed by his memories of that night that he confided in a commander who, many years later, told the story to me. That in turn spurred the search for the documents. Those were found after a three-month examination of thousands of pages of classified and unclassified Seals reports and communiqués that had been boxed up since the war in the Navy’s archives.

The after-action reports provided the first concrete evidence of the terrible events, which Kerrey had hardly addressed even in private conversation, and he reacted testily when asked about it. “There’s a part of me that wants to say to you all the memories that I’ve got are my memories, and I’m not going to talk about them,” he said. “We thought we were going over there to fight for the American people. We come back, we find out that the American people didn’t want us to do it. And ever since that time we’ve been poked, prodded, bent, spindled, mutilated, and I don’t like it. Part of living with the memory, some of those memories, is to forget them. I’ve got a right to say to you it’s none of your damned business. I carry memories of what I did, and I survive and live based upon lots of different mechanisms.”

This first meeting came at a complicated time for Kerrey, who was just days from announcing whether he would make a second run for the presidency and challenge Vice President Al Gore for the 2000 Democratic nomination. Handsome and charismatic, a crafty politician with a keen intellect, Kerrey was widely regarded as an attractive candidate. He was an outspoken Democrat with a strong appeal for independents. There was the glamour of his much-publicized love affair while governor of Nebraska with Debra Winger, the actress. And he was a war hero. Though he rarely wore it, he was a recipient of the Medal of Honor — awarded to him after he lost part of a leg during his last mission in Vietnam.

Kerrey knew that a race against an incumbent like Gore would be an uphill, nasty struggle. It was mostly this fact, he said, and doubts about his commitment to wage such a difficult campaign, that persuaded him to drop out, which he did just before Christmas. A little more than a year later, he would startle even his friends by announcing that he would not seek a third term in the Senate, despite overwhelmingly favorable poll numbers.

In an interview in January, Kerrey said that his actions in Vietnam had no bearing on his decision to drop out of elective politics, presidential or otherwise. He said he left politics simply because he wanted to pursue other challenges — particularly in education — while he was still relatively young.
http://www.nytimes.com/2001/04/25/magazine/25KERREY.html