Part 1: Navy SEALs:  Navy on a Mission to Build Up SEAL Force 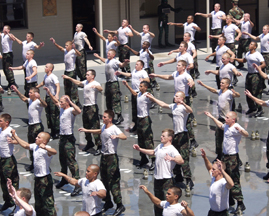 They train over on Coronado, but little is known about them. The Navy SEALs -- that stands for sea, air and land -- are renown for their stealth, speed, and precision. KPBS Radio's Andrea Hsu has more.
(Photo: Navy SEAL hopefuls undergo strenuous training. Naval Special Warfare Center).
More»
Part 2: Navy SEALs»
Part 1: Navy on a Mission to Build Up SEAL Force
Mar 26, 2007
Andrea Hsu

They train over on Coronado, but little is known about them. The Navy SEALs -- that stands for sea, air and land -- are renown for their stealth, speed, and precision. It's well known that they're operating in Iraq and Afghanistan. What exactly they're doing over there is kept secret. But as KPBS Radio's Andrea Hsu reports, one mission is clear -- and that's the need to build the force.

As military installations go, the Naval Special Warfare Center is remarkably modest. But pass through the gates, and you immediately sense a very robust presence.

In a courtyard known as the GRINDER, more than 200 young men are well into a 90-minute high-intensity workout. A shirtless and heavily tattooed instructor shouts out orders. Other instructors pace up and down the aisles with megaphones. These SEAL recruits are in the last week of In-Doc -- a three-week ramp-up to their formal training.

This is a scene that makes Commanding Officer Captain Roger Herbert happy.

Herbert: For the first time in years I've got a full class out there. Class 264 that you observed looks like a battalion, doesn't it? We don't usually see that.

This is especially good news for the SEALs now. The Pentagon wants the force of just over 2,200 to add 500 new SEALs by the year 2010. Captain Herbert says it's not going to be easy.

Herbert: Growing the force is very problematic. It's not just a spicket you can turn on and off. For the SEALS, from the day that a guy gets here to the day that I give the guy his trident, the SEAL insignia takes 59 weeks minimum, if he makes it through the first pass.

And so - the Navy SEALs are changing how they recruit and how they prepare recruits for the most grueling of training pipelines.

Commander Duncan Smith heads up the Naval Special Warfare recruiting directorate. He travels the country, dropping in on triathlons, athletic camps, the ESPN X-games, in search of the next generation of SEALs.

Smith: We find that wrestlers do well, water polo players, non traditional athletes do well - snowboarders, big wall climbers, ice climbers, who are able to crank out 42-44 pullups. You can recognize immediately after talking to them. They have personal discipline and drive to succeed at any kind of physical or mental challenge.

And then there's the Navy SEAL SuperFrog.

The triathlon -- held on Coronado Island every fall -- is open to anyone who wants to take on the Navy's top athletes. The recruiting directorate has made a TV special about the event that they hope to get on a national broadcast. It's part survivor and part infomercial for the SEALs. Commander Smith says putting this sort of public face on the force was unheard of until now.

Smith: Traditionally we've had the luxury of not sharing any of our tactics, techniques, procedures. Today we don't have that luxury. We want to make sure the young man who has interest and the desire and the drive also has information.

Information on just how physically and mentally stressful the training is going to be. And how dangerous the work is -- especially at a time of war.

Smith: Because we don't want the young man who was talked into this, or because he was given a 40K bonus. When cold, dark, wet, waves are crashing, only person that has to drive the decision to be a seal is truly you.

For those who decide to take the plunge - literally - there's help to be had. The SEALs recently began a mentoring program in which retired SEALs help recruits with specific weaknesses in swimming or running for example. They hope better preparation will help more of them go the distance. It should be noted that those that make it will almost certainly see combat. Eighteen SEALs have died so far in the war on terror.

A U.S. Navy program to boost the elite SEALs force is starting to pay off, the Navy Times reported Monday.

The newspaper said that the Naval Special Warfare Command had overhauled both its recruiting and training techniques in the past year in a bid to boost volunteers to the under-strength force and also to boost recruits in their efforts to pass the unit's demanding training program.

The NSWC and the Navy had even set up a mentorship program to ease the transition of recruits in their training process, the newspaper said.

The paper said a new recruiting division at Recruit Training Command had been established to strengthen teamwork concepts among recruits, boost physical training levels and capabilities and boost their overall general performance.

The Navy Times said the program was already showing some improvements in recruitment figures and in the percentage of recruits who made the grade.

It said that SEALs class 263, which completed a six-month basic course on March 30, produced 46 men SEALs out of 144 class members who started the program, giving a success rate of 32 percent. This was a significant improvement on the old average completion rate of 26 percent, the Navy Times said.

U.S. security concerns have created a growing demand for the skill sets of the SEALS. However the current force level of 2,270 SEALS is below the officially required level by 12 percent. The Pentagon wants the force to grow to 3,038 SEALs by 2011, the report said.