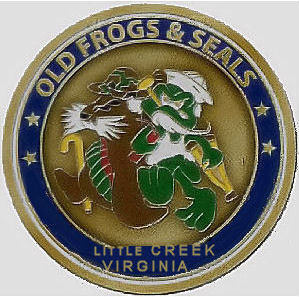 We all had a great time reminiscing and fellowshipping at our special 50th reunion. Many thanks to you and others that made it possible. Hooyah,
Bill Langley 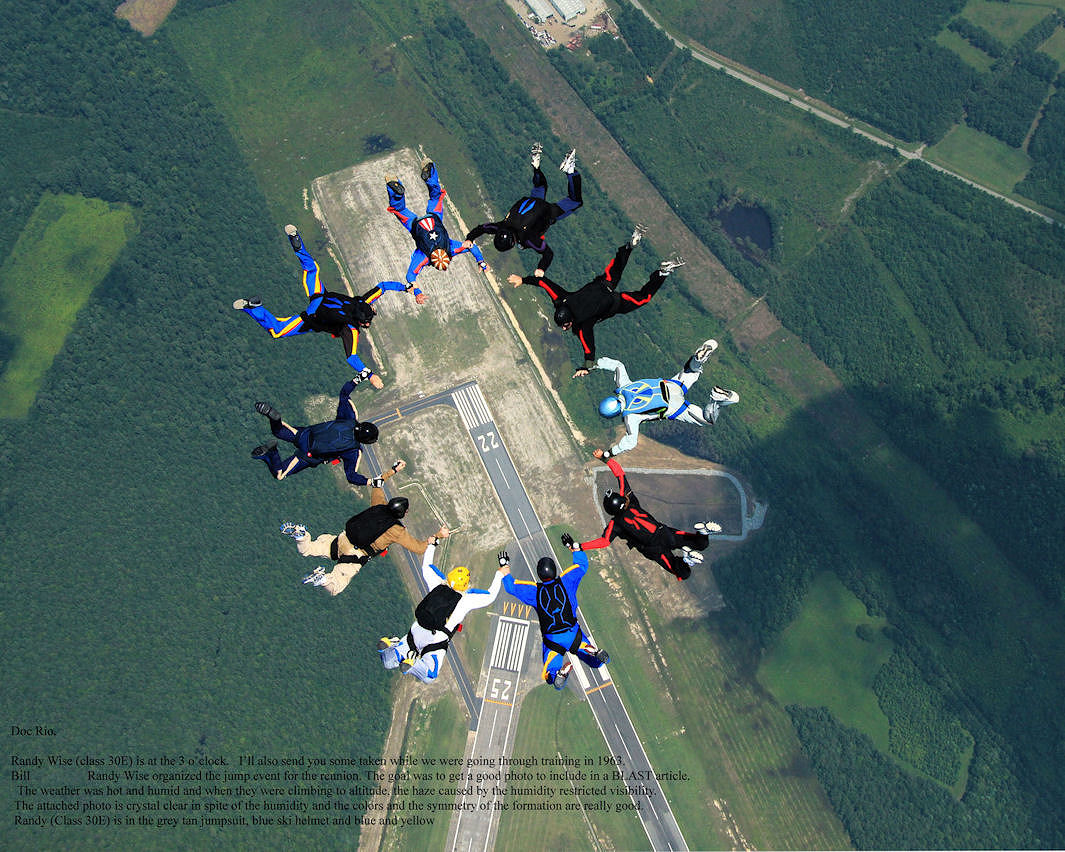 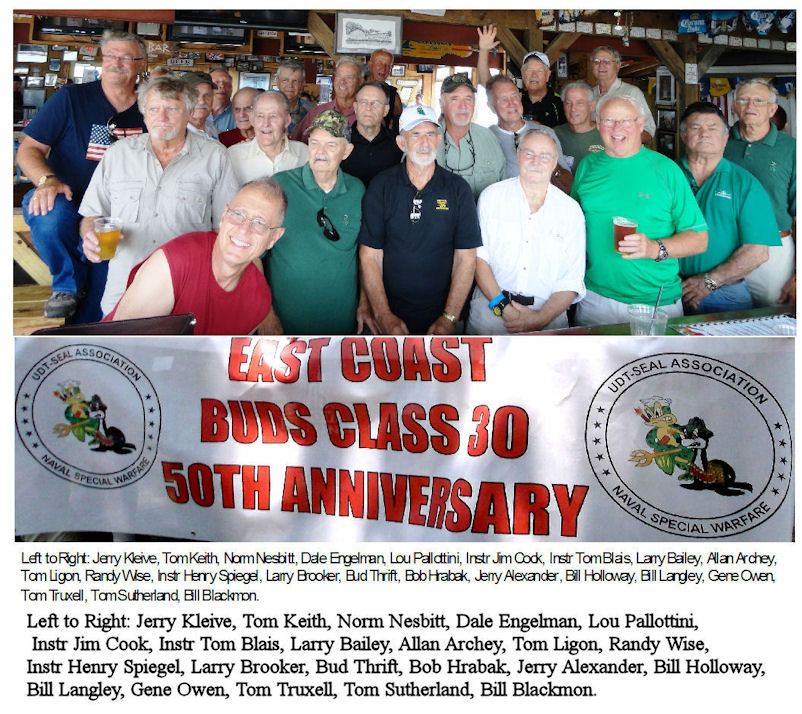 Disclaimer Notice:   Some or all of this material was written collaboratively by Teammates or visitors to this website. While every effort is made to ensure that the content of this website is accurate, the website is provided “as is” and sealtwo.org makes no representations or warranties in relation to the accuracy or completeness of the information found on it.  While the content of this site is provided in good faith, we do not warrant that the information will be kept up to date, be true and not misleading, or that this site will always (or ever) be available for use. For reliable information of any sort, you must consult an officially qualified professional in The U.S. Navy, or the Department of Defense.  You may use this site at your own risk that none, part of or all of what is posted is factual. By visiting this website you are accepting all the terms of this disclaimer notice.  If you do not agree with anything in this notice you should not enter into this website. Some material on this website, including text and images, is protected by copyright law and is copyright to sealtwo.org unless credited otherwise. It may be copied, reproduced, republished, downloaded, posted, broadcast and transmitted  for your own personal only.

Left to Right: The man bending over with his back to the camera and the other man with sunglasses were with John Wayne, next is Chester Coggeshall, PO1 Bob Auger, Ens Bill Langley (standing on a chair), Doc Meyers (hat), John “The Duke” Wayne, Fud Miller, Chief Gene Gayman, an Army Capt, PO3 Marshall, SN Stein, Jim Zultewicz, an Army Lt, Grossmouth (now a Navy surgeon), and Dwight Plumlee. Tom Winter was also with the UDT survey team but was not in the picture.

The picture was taken in 1972 at a beach in Rio Hato, Panama. It was taken about two hours after the completion of a beach survey conducted jointly by UDT-21 and Panamanian frogmen. Sharks were spotted about halfway through the survey so it finished quickly and the Panamanian frogmen immediately left the area.

The Panamanian president had a villa near the beach and the barracks that the UDT detachment stayed in was also near the beach. The night before the survey, President Omar Torrijos invited the Panamanian officer, Chief Gene Gayman, Ensign Bill Langley, and an Army officer to his villa for a brief visit. President Torrijos, while lying comfortably on a hammock in a screened-in porch, welcomed them to Panama, invited them to have tea, thanked them for coming to Rio Hato to conduct the beach survey, and told them that John Wayne was scheduled to visit with him the next day. An armed guard was stationed on each side of the hammock and several more were strategically located outside the villa. No doubt there were more armed guards on alert nearby.

While drinking tea with the president as he relaxed in his hammock, one person at a time would come in from a line that had formed outside to informally express their problems or concerns. After listening to them, he would make a decision and tell his aid what to do. They would leave and the next person would come in. The president appeared to be very accessible to the Panamanian people that lived in the area. The next morning SN Stein conducted reveille by riding into the barracks on the back of a 4½ foot elephant that was trumpeting loudly; an unusual beginning of a very special day. During the survey a small plane flew over and someone commented, “There goes John Wayne”.

President Torrijos must have told John Wayne who we were and what we were doing because as we were cleaning our gear, a large car pulls up and out steps John Wayne. He was a big man (6’5″) and he was extremely gracious, nice, and friendly toward everyone. He told us that he admired and respected the UDT/SEAL community and the U S military. He had a few beers, smoked a big cigar and partied with us in John Wayne style for at least an hour.

We all remember the frogman tradition of throwing someone in the water for almost anything. I think it was Stein who said, “Let’s throw him in the water”, to which John replied, “I’ll bury you boy”. Everyone laughed and a few minutes later John’s party decided it was time to go. For that brief hour we all felt like we were on a movie set with “The Duke / Big John”.

Left to Right: The man bending over with his back to us and the other with sunglasses are with “The Duke”, next is Chester Coggeshall, PO1 Bob Auger, Ens Bill Langley (standing on a chair), Doc Meyers (hat), John “The Duke” Wayne, Fud Miller, Chief Gene Gayman, army Capt, PO3 Marshall, SN Stein, Jim Zultewicz, army Lt, Grossmouth (now a navy surgeon), and Dwight Plumlee. Tom Winter was also with the UDT group but was not in the picture. 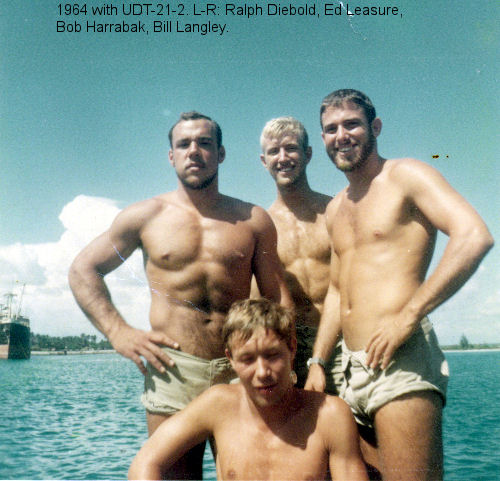 The first one is in 1967 with ST-2 in Vietnam.  L-R: Sam Fornier, Durwood White, Lt. Bill Bishop, Bill MacCarthy, Bill Langley, Doc “Shorty” Long, Gunther Jaunzems (sp) The next one is in 1964 with UDT-21-2.  L-R: Ralph Diebold, Ed Leasure, Bob Harrabak, Bill Langley. The third one is in 1972 with UDT-21 in Rio Hato, Panama.  Ens Bill Langley is on a chair behind John Wayne.  P.O. Auger is in front of Ens Langley’s right arm, Doc Meyers is to John’s right, Cf Gene Gayman is to John’s left, P.O. Marshall is next, and SN Stien is with the clipboard.  Other names are unknown at this time.  This picture was taken a short time after we finished surveying the beach at Rio Hato with the Panamanian frogmen.  Sharks were spotted about halfway through the survey so we finished this one smartly.  The Panamanian president had a villa near the beach and the barracks we stayed in were also near the beach.  The night before the survey, El Presidente Omar Torrijos invited the Panamanian Lt, Cf Gayman, and me to his villa for a visit.  He told us that John Wayne was going to visit him the next day while we were surveying the beach.  The next morning SN Stien conducted reveille by riding into our barracks on the back of a 4 foot elephant trumpting loudly, an unusual beginning to a very special day.  During the survey a small plane flew over and someone commented, “there goes the Duke”.  We didn’t give it another thought.  Presidente Torrijos must have told John who were and what we were doing because as we were cleaning our gear, a large car pulls up and out steps John Wayne.  He was very friendly and gracious.  He socialized with us the John Wayne way and talked to us for at least an hour.  He knew a lot about the UDT frogmen and showed great respect.  For that brief hour we all felt like we were in a screening for a movie with “Big John.”  Just another day in the life of a frogman.

1. Nobody makes it across the “death trap”. 2. Bill Langley and Bud Thrift are in the center of a Night Problem briefing.

4. Climbing up and starting across the “death trap” during “So Solly Day”, the last day of Hell Week.